Plassac is situated 3kms south of Blaye, and occupies a territory not very different from those of the neighboring estuary municipalities.

The southern border of the municipality (river named “Draft or Gamaye” is considered as being a frontier between Oil country and Oc Country.

Many vestiges attest the human presence. The witnesses of a rich past give to the municipality a particular identity. Nestled in this nice hillside place, Plassac does deserve to be classified “old town”.

A campanian palace was built at the edge of the estuary from the 1st century. The architect was inspired by maritime villae, so, he had a marvelous ensemble built for a rich Italian owner. The vestiges of this ensemble are still visible today. The third Pompeian style mural decoration adorns the first villa. The rural property is stretching on the current territory of the municipality.

On the first villa’s fitted terrace, two other palaces are going to be handed down from the early 2nd century to the early 5th. The most recent owner known as Saint Bertrand, Bishop of the city of Mans, gave it as a present to his church in a testament from 615.

The remains of these three palaces are visible on which is called “The Gallo Roman villa ‘s ruins”. The departmental council of Gironde, owner of the site, carried out a rehabilitation to make them easier to read for visitors. He also put at disposal a 3D restitution for the 2nd century villa which is presented in the friends of old town Plassac association’s museum. These are high quality touristic tools presented in the municipality.

IIt is difficult to trace Plassac’ history in that medieval era: in fact, there are no architectural remains left enough to highlight it.

According to a survey carried out in the current church, it may be the case that a Merovingian construction has been erected at that place. In the mosaic which is still present close to the church, a grave has been dug for a young woman whose skeleton was found.

The village might have gathered on the hillside overlooking the estuary, at the locality Montuzet (Birds mountain), surrounding a convent dating back 732 of which elements are still visible. Another testimony concerns the discovery of a monetary treasure. The collective memory has set the legends linked to the Carolingian gest at the time too. These legends are connected with the Saracens’ passage; the “False Heart” (originally “Fault heart”) Monolith cross is the visible trace of that (when Saracens’’ hearts would have failed in front of Charlemagne) anchored in Beaumont’ soil. Therefore, this is not surprising to see the statue of Charlemagne in the current church. 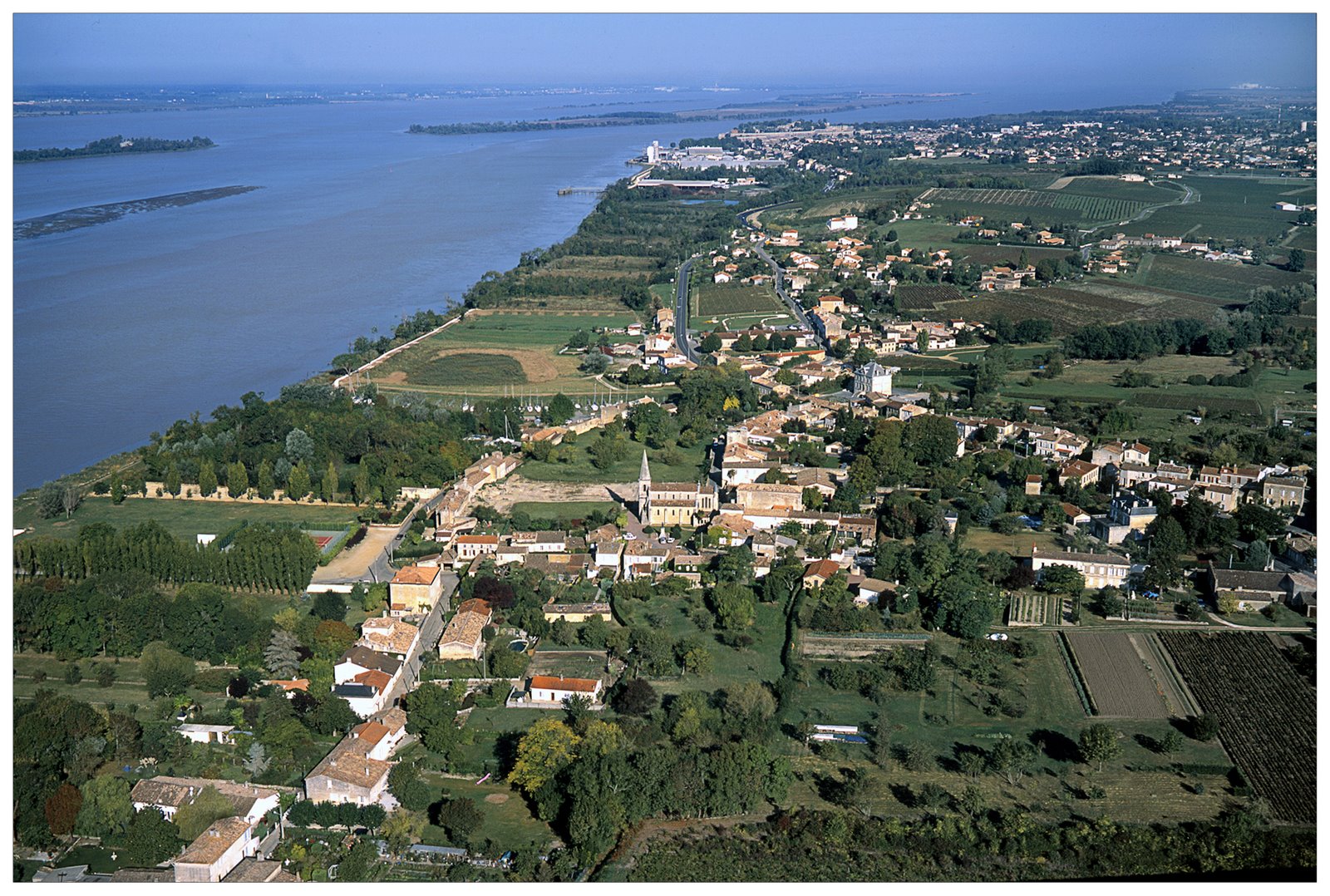 In the modern age

The architectural traces of this period are much more numerous. The frame is marked by the three poles development of the municipality :

The activity is organized on the hillside around the “noble houses”.” Monconseil” and “Gadeau” and “Papin de la Gaucherie” ‘s ones are some examples.

Furthermore, some of winemakers hamlets are marked with typical names such as “winery”, “pint” “Les Trincards” all present architectural particularities with their “sharing” plot around which is organized the group of houses with their often arched well. In the town center, streets follow the contour lines giving the impression of an “Italian style “terrace arrangement. Quite often and in particular in “Chardonnet or Port” streets, dwellings have got a front small yard enclosed by a round - topped wall. At the back, a stretched parcel is occupied by a garden.

Dominating a slope planted with wines at the South of Plassac, an elegant neo-gothic castle was built in 1878, on the location of the old seigniorial house.

The green island part of the municipal district, had a strong wine activity during the phylloxera crisis. A village has been fitted out in the 19th century around that activity.

Plassac’ s harbour bustled with high levels of activity from the 18th to the early 20th centuries. At the edge of the estuary, long distance captains, shopkeepers and negotiators’ families settled there.
The construction of beautiful stone houses is the proof of that.
The former city hall, some dwellings from the locality « la Mandraude”  and the houses around the port deserves a special mention. In fact, many were built during the second half of the 19th century, and more particularly during the Second Empire.They are facing according to the street. They have a slate roof, a park, and occupy the spaces left between the different initial “villages”.

Linked to the maritime activity, a religious brotherhood settled in Plassac. Its foundation was assigned to EUDES, the Duke of Aquitaine in 1732. This confraternity was organized by Louis XI. Big sailors’ pilgrimages have been organized every year near Pentecost for centuries until the French Revolution. The closest parishes at the edge of the estuary from Bordeaux, (the confraternity had its headquarters in Saint Michel church) took part into these ceremonies. The buildings belonging to the former Lazarists’ convent and a house in the borough named “the priory” is still demonstrating the religious presence. The church keeps the statue of Notre Dame de Montuzet and Saint Fructose’s relics. The monument “Virgin of sailors” dominates the village and has been built more recently (1874). It was consecrated by the archbishop of Bordeaux, Donnet.

The scattered home is not very developed on the hillsides. Urbanization has grown linearly, along the departmental road from Blaye to Bourg as well as the communal lane from Bourg to “Chante Alouette”. The different housing cores from the previous centuries have met up.

Elsewhere, on the long slopes leading to the “brouillon” or “Gadeau”, a quality wine is reigning supreme.


Monday, May 22nd
12:00: Gallo Roman lunch at the application restaurant of the Estuary vocational school with animations by some pupils from the high school